After six incredible decades of live performance, beloved artist Bob Seger is retiring from the road, but he's bringing one last show, dubbed The Travelin' Man Tour to Allstate Arena on Friday 14th December 2018! Seger will, of course, be joined by his endlessly talented backing group The Silver Bullet Band, and will be performing fan-favorites, hits and plenty more from his 56 years in the industry! 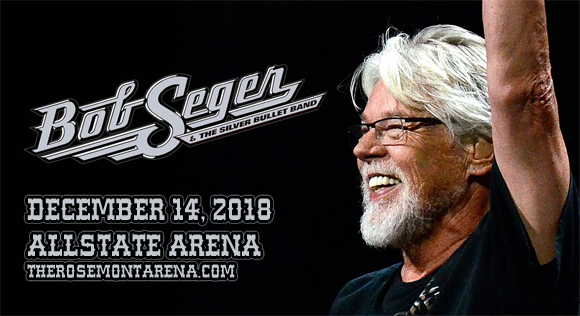 Bob Seger is one of the world's best-selling artists of all time, with six decades in the music industry and over 75 million records sold to date. Seger is American singer-songwriter, guitarist and pianist whose career began in the 1960s as part of Bob Seger and the Last Heard and Bob Seger System, who were popular in Seger's native Detroit, and the latter of which had a hit with the 1968 track "Ramblin' Gamblin' Man". In 1973, Seger formed Bob Seger and the Silver Bullet Band who 1976 album Night Moves was a national hit and earned them six-times platinum certification. Throughout their career, the band continued to score hits, including "Turn the Page", "Still the Same", "We've Got Tonight", "Against the Wind", "You'll Accomp'ny Me", "Shame on the Moon", "Like a Rock", and "Shakedown" (written for the 1987 hit film Beverly Hills Cop II). Seger has been inducted into both the Rock and Roll Hall of Fame and the Songwriters Hall of Fame, in 2004 and 2012 respectively.