Eric Church is unstoppable! Not known for doing things traditionally, the maverick country artist comes to Allstate Arena on Friday 22nd March 2019 for the first of two unique nights of world-class music on his Double Down Tour! Bringing fans a stadium show like no other, Church will perform a three hour set on both nights, each one different from the other! "We take over your f—ing city," Church said during a Facebook Live video! 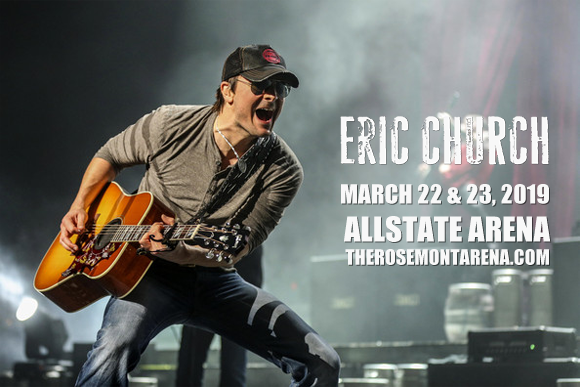 Nashville singer-songwriter Eric Church began his career as an industry songwriter, co-writing Terri Clark's 2005 single "The World Needs a Drink" and Dean Miller's 2005 track "Whiskey Wings" from the album Platinum before signing to Capitol Nashville later that year as an artist in his own right. His 2006 debut album Sinners Like Me launched three Billboard country chart top twenty singles: "How 'Bout You", "Two Pink Lines", and "Guys Like Me". Church's 2011 album Chief was a number one on both the Billboard 200 and the Billboard Top Country Albums charts, and gave him his first two number one singles on the U.S. Billboard Hot Country Songs chart: "Drink in My Hand" and "Springsteen". It also earned Church a Grammy Award nomination. Church is known for his collaborations with fellow country artists Luke Bryan, Jason Aldean and Keith Urban. Desperate Man, his sixth studio album, was released in October 2018.