EVENT CANCELLED. Please contact your ticket point of purchase to claim a refund on your tickets.

Five Finger Death Punch are once again teaming up with previous tour-mates Papa Roach to head out on a goliath North American tour that comes to Allstate Arena on Tuesday 19th May 2020! FFDP are celebrating the dawning of a brand new era with the release of their eighth studio album, F8 (their first since the departure of drummer Jeremy Spencer), which represents a different chapter for the band both musically and personally. Joining them as support guests will be I Prevail & Ice Nine Kills! 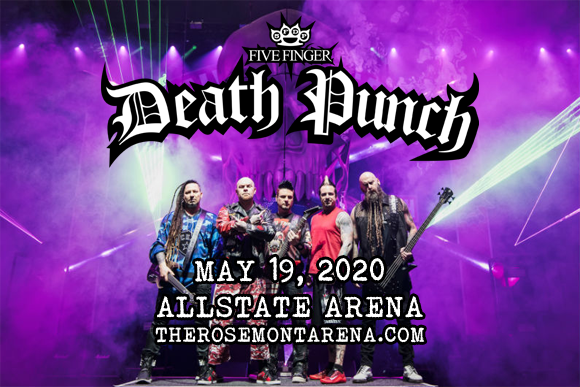 One of rock and metal's most successful recent bands, Five Finger Death Punch has been active since 2005 and was formed in Las Vegas, Nevada, by several former members of U.P.O. and W.A.S.P.. Currently, the group consists of founding members Ivan Moody (vocals) and Zoltan Bathory (guitar), as well as Jason Hook (guitar), Chris Kaell (bass) and Charlie Engen (drums). Two years after forming, the group released its debut studio album, The Way of the Fist, selling more than 500,000 copies in the United States. War is the Answer, their second studio album, began a three-album consecutive streak of platinum-selling records for the band, with their following three albums achieving gold certification. F8, their eighth studio album, is released in 2020.