One of those most exciting voices in CCM and a rare artist that has found equal success in both the Christian and secualr music markets, Grammy Award-winner Lauren Daigle comes to Allstate Arena on Thursday 18th June 2020 on her biggest headline tour to date! The “You Say” singer is looking forward to performing tracks from her most recent album, Look Up, Child, for fans on the area stint:

“There’s no better feeling than to be able to look out from the stage and see how people have connected with the songs on this album. Our shows feel like one big party of togetherness, and I can’t wait to create a whole new tour for 2020. It’s going to be so much fun!” 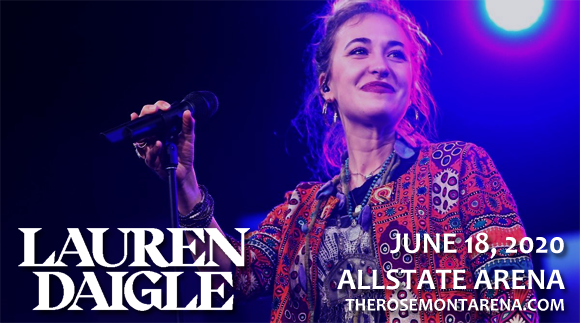 Grammy Award-winning contemporary Christian music artist Lauren Daigle's first introduction to the public was as a contestant on American Idol in 2012. Three years later, her debut on North Point InsideOut's 2015 album Hear, as a featured singer on the songs "Close" and "You Alone", following with her solo debut album, How Can It Be, later that year. How Can It Be debuted at number one on the Billboard Christian Albums Chart and reached number 17 on the Digital Albums Chart, and number 28 on the Hot 100. Certified platinum by the RIAA, it produced three number one singles on the Billboard Christian Airplay chart: "First", "Trust in You" and "O Lord". Look Up, Child, her 2018 follow-up, also debuted at number one on the Top Christian Albums chart, and at number three on the Billboard 200 chart, making it the highest-charting Christian album by a woman in over 20 years. It won the Grammy Award for Best Contemporary Christian Music Album at the 2019 awards ceremony, and "You Say", its lead single, won the Grammy Award for Best Contemporary Christian Music Song. In addition to her two Grammys, Daigle has won seven GMA Dove Awards, two Billboard Music Awards, two American Music Awards, and she has charted four number one singles on both the Billboard Christian Airplay and Hot Christian Songs chart.