The greatest and best-selling tropical salsa artist of all time, Marc Anthony, returns to Allstate Arena on Sunday 27th October 2019 on his Opus Tour! Celebrating the release of his red hot album of the same name, Anthony will be whipping up the crowd with a high-energy, larger-than-life show that will keep you dancing all night long! The multiple Grammy and Latin Grammy Award-winner is known for his engaging, top-grossing shows, so don't delay – grab your tickets while you can! 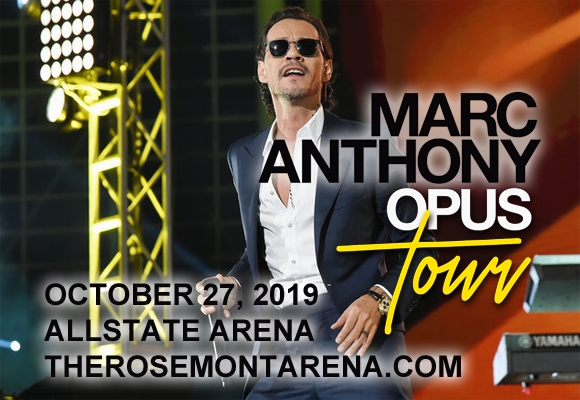 Marc Anthony is an American singer, actor, record producer and television producer who has sold over 12 million albums worldwide, making him the best-selling tropical salsa artist of all time. A two-time Grammy and six-time Latin Grammy Award-winner, Anthony began his career in the 1980s as a session singer for freestyle and house music acts, and later performed as a backing vocalist and songwriter for acts including the Latin Rascals and Menudo, before making his Spanish-language debut in 1993 with the album Otra Nota. Anthony holds two Guinness World Records: for best-selling tropical/salsa artist and for the most number-one albums on the Billboard Tropical Albums year-end charts. He was inducted into the Billboard Hall of Fame in 2012, and was given a Lifetime Achievement Award by the Congressional Hispanic Caucus Institute in September 2009.