Shawn Mendes comes to Allstate Arena on Thursday 27th June 2019 as part of his global self-titled arena tour! Promoting his smash hit third studio album, which features the singles "In My Blood," "Lost in Japan" and "Youth" ft Khalid, Mendes is one of pop's biggest rising stars and will be bringing a spectacular show to match the hype! Tickets available now! 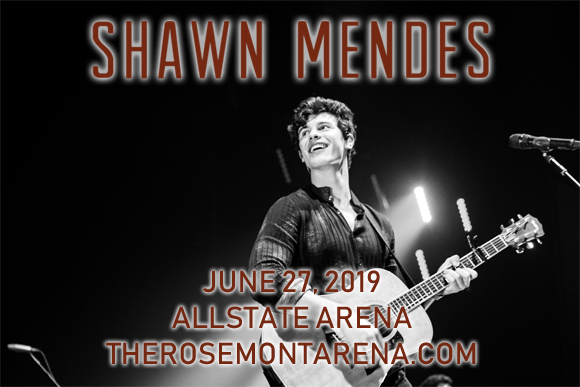 Canadian singer, songwriter and model Shawn Mendes first came to public attention as a viral sensation, in 2013, gaining a following by posting song covers on the video-sharing application Vine. Signing to Island Records in 2014, Mendes released his self-titled debut EP later that year, followed by his debut studio album, Handwritten, in 2015. The album launched the single "Stitches", which reached number one in the United Kingdom and the top ten in the United States and Canada. In 2016, Mendes released his second studio album, Illuminate (2016), which brought him international fame and launched the top ten singles "Treat You Better" and "There's Nothing Holdin' Me Back". Mendes' self-titled third studio album was released in 2016 and was his third consecutive album to hit the top spot on the Billboard Hot 100, making him the third-youngest artist to achieve three number one albums. Mendes' debut album's success made him one of only five artists ever to debut at number one before the age of 18 and in 2017, Mendes became the first artist to land three number one singles on the Billboard Adult Contemporary chart. In 2018, he became the first artist achieve four number one singles on the Adult Pop Songs chart before the age of 20. To date, Mendes has won 13 SOCAN awards, three Juno Awards, ten MTV Europe Music Awards, eight iHeartRadio MMVAs, two American Music Awards, and received two Grammy Award nominations and in 2018, Time named Mendes one of the 100 most influential people in the world on their annual list.